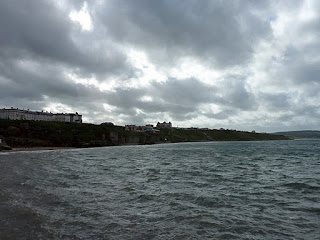 all night the waves crash in the darkness.
I long for the slate roof of the sea to return,
instead of these ramshackle houses,
crafted from salt and shale, smashing themselves into nothing.
a seagull looks to the moon, tries to hold it in their sight
but the waves tonight are drinking the moon,
and the gulls’ cries shatter and sink like broken marbles,
sinking to the seabed, beautiful sea mines for the fish.
in the morning I ache from the storm,
hurting in both the obvious and less obvious places.
the sun has plaited the ribbons of the sea,
still trying to roar but bound by its shackles.
the cries of the gulls are less caustic,
believing kindness is now on their side,
not knowing why the storm came but perhaps
knowing themselves better as they lived through it.
Posted by Mark Sargeant at 16:37

In life we hardly know why the storms come...but yes, we can glean lessons from them. Wise poem. beautifully expressed.

Thank you Jade! I've been rather quiet on my blog lately, hopefully this will change soon...

I'm really glad you like the poem. It was a way of expressing the anxiety that sometimes appears like a storm without warning & wakes you in the night.

The saving grace is that like a storm cloud, it eventually passes over, and peace and calm will appear when the skies are clear :)

My blog alert seems to be on a go slow which is why I am so late to this absolutely lovely poem, which has too many superb phrases to select a mere one or two. We stay occasionally in a cottage surrounded on three sides by water and on stormy nights it is like this. Not the anxiety though since it is not our responsibility to maintain it.

Thanks Sandra, I'm glad you liked it. The cottage sounds lovely, I love being by the sea (even when it is stormy, as long as you can shelter indoors by a warm fire!)

"I long for the slate roof of the sea to return,
instead of these ramshackle houses,
crafted from salt and shale,"

Wow Mark, what wonderful writing! That really is beautiful.

So glad for your visit to me, as it alerted me that there was new stuff here to be read. And what excellent stuff it is. :-)

I am a sucker for anything to do with the ocean or storms. The deal is sweetened when the wok is lovely such as this.

Hi Susannah, thanks for visiting again, I'm pleased you liked the poem. I think my work is getting better with practice :)

Thanks Brendan for stopping by, I'm glad you liked the poem.